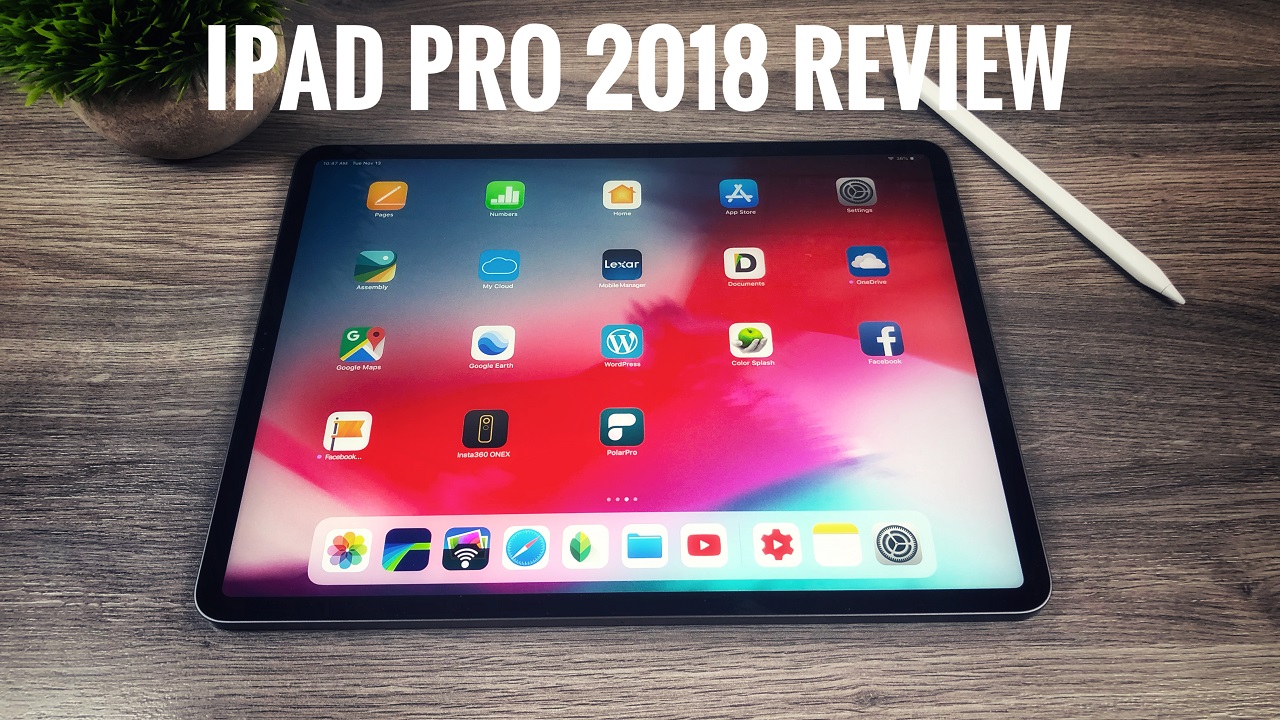 Here is my review of the new 12.9″ iPad Pro 2018. I did not jump on the review bandwagon on release day as many tend to do. I feel I like to use the product for a good amount of time in normal real-world scenarios like I would use it on a day to day basis. The new iPad Pro 2018 has been out for a little over a week now and I feel I am ready to make a review. Now, this review comes from the view of a video editor. Last year I transitioned to 100% mobile video editing and now only edit on my iPad Pro. Every day I edit video for my YouTube channel, Drone and GoPro videos as well as some work for clients, so having a fast and reliable device is important for me. Up until last week, I had been using the 10.5″ second generation iPad Pro and I have been really pleased with its performance.

Like last year Apple is offering the iPad Pro 2018 in 2 different sizes. They have managed to make the screen on the smaller iPad Pro 11 inches this year due to the smaller bezels. The larger iPad comes with a screen size of 12.9″ but the overall size is quite a bit smaller. After Apple announced the new 3rd Generation iPad Pros I decided I would step up to the 12.9″ now that Apple has shrunk the footprint of the device into what I feel is a more manageable size. Size is important to me as I tend to hold my iPad a lot when editing as I quite often edit in my living room and while out on a patio having a coffee. Moving to the larger iPad Pro 2018 did take a little getting used to, that extra 2″ inches of screen does make quite a bit of difference to the overall size and handling of the iPad. But after a few days, I easily adapted and I am quite glad I made the jump to the larger screen size. If any of you are on the fence about what size to get, I truly recommend going to the larger size if you will be editing photos or videos. You will love the extra canvas size and even with its larger size, it is still very comfortable to hold, even for long periods of time.

These years iPad Pro’s have seen a massive change in both appearance and functionality. Apple has removed the home button and replaced it with its true depth camera and face ID system. The bezels have shrunk and the corners of the screen are now rounded. I was a little skeptical at first on how I would like the removal of the home button, and for me, it did take some getting used to. Without the home button, all the gestures from the iPhone X series have been carried over to the iPad Pro. The first few days using the new setup was quite awkward for me, always reaching for the home button that was not there. A week in an now I don’t miss it at all. The only issue I have is quite often I have the FaceID camera covered with my hands so it will not unlock, however, the iPad offers up a friendly reminder that camera is covered and life moves on.

Like I stated I mainly use my iPad Pro for video editing, and for the most part, I edit with an app called LumaFusion which is a full featured and advance editing app for iOS devices. In general, when doing simple edits the is no noticeable difference in performance after all the old iPad Pro and LumaFusion were already a great pair. You start to notice just how powerful these new iPad Pro’s are when you start to get into multi-Track 4K editing with lots of edits, luts, speed changes and effects. The new iPad Pro is much snappier and has less hesitation. One thing to note if you are looking for a massive decrease in render times you will be disappointed. In my tests when rendering a simple 4K video the old iPad Pro and new iPad Pro 2018 finish in the exact same amount of time. You will notice a slight improvement when you start adding transitions, filters and speed changes, but not by much. I have found that LumaFusion seems to crash now and then on the new iPad Pro most likely the app needs to be updated to fully support the iPad Pro 2018. Personally, I am not too worried about that, the folks at LumaFusion are most likely hard at work tweaking the code and preparing a new version that will be optimized for the new iPad Pro 2018.

In closing, I have been quite happy with the new iPad Pro 2018, however it was a pretty hefty price to pay. The new Apple Pencil 2 works flawlessly and a much better implementation than the first generation. You can watch my full iPad Pro 2018 YouTube review below.