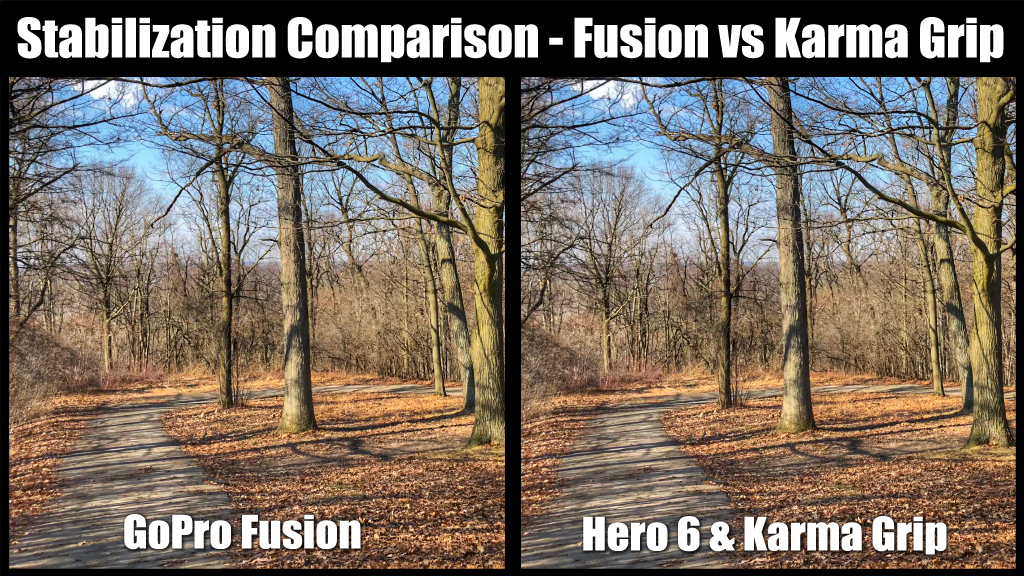 I thought it would be interesting to do a stabilization test of the GoPro Fusion versus the Hero 6 Black mounted in the Karma Grip. So basically a test of a mechanical gimbal verses 360 software stabilized video. There are pros and cons to both setups. First off importing and editing the footage of the Hero 6 Black is very simple as the video recorded is already stabilized and ready to be edited. The video files on the GoPro Fusion have to be imported, stitched and then rendered to a 16:9 video which can take quite some time depending on the length of the clip. So when it comes to ease of use the mechanical stabilizer is the winner. Another thing to consider is using an action camera such as the Hero 6 Black will produce higher quality videos.

However when it comes to usability, ease of mounting, a 360 camera such as the GoPro Fusion or the Rylo 360 definitely has the advantage and sometimes that is the deciding factor. Of course, we all want the best quality video we can get but there are those situations where using a mechanical gimbal such as the Karma Grip just isn’t practical or even possible. Using a 360 camera opens up a whole new avenue to capture stabilized video during activities that used to be impossible. When you also factor in that many 360 cameras are waterproof such as the Fusion or have a waterproof housing that can also be a deciding factor. Most mechanical gimbals are not waterproof with the exception of a few and they are extremely delicate and can not be used in some situations.

I think we are just at the tip of the iceberg on what 360 technology will bring us in the future and I can really see it becoming a mainstream way to capture action video over the traditional action camera and gimbal setup. What are your thoughts? Watch our video as we show a side by side stabilization comparison of the GoPro Fusion and the Hero 6 Black mounted in the Karma Grip.